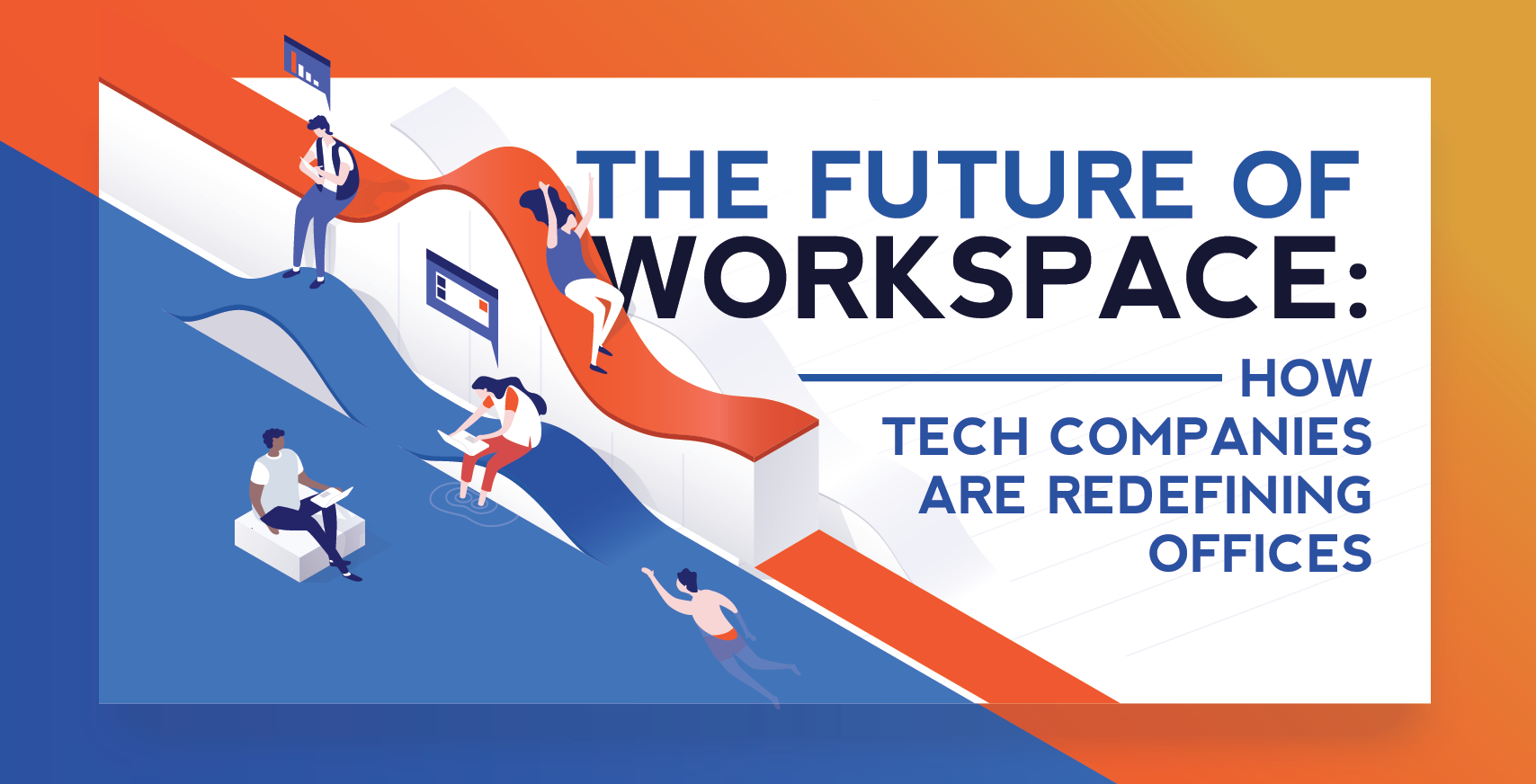 The architecture of workspaces has come a long way since the early 1900s. The kind of labor required from the workforce also evolved from manual to automated. Employees used to do a combination of sitting, standing, and moving around to get the job done; but now, it’s common to see people accomplishing all their tasks with one device, a handy laptop.

There’s no doubt that technology has been instrumental in all of these changes. In recent years, people have also seen the emergence of co-working areas, or what’s more commonly known as a flexible workspace.

Tech companies themselves have influenced office layouts with their cool adaptation of their developments at work to increase collaboration and employee satisfaction. They are not far off—it’s been proven that employees value aesthetics and are happier to be working in beautiful office environments, which then leads to higher productivity rates. These tech workspaces have become the content of social media because people are seeing the benefits of doing work in an environment that doesn’t have the traditional office design.

Other industries can learn a thing or two from these tech companies with mind-blowing offices. Your favorite might be in the list below.

Office Space Design: Then and Now

Every decade, there are substantial changes that happen in the design of office spaces. The common thread that ties all these changes is the fact that they are influenced by technology. From manual typewriters in the 1950s to potentially tiny projector cameras in the 2030s, there’s no denying how integral tech is for the worldwide workforce.

You may be surprised to hear that open-plan layouts were hip back in the 50s. This design was mainly implemented for employee visibility and to check if each one was doing their job, similar to that of factory workers.

The infamous cubicles were born to give employees some privacy with room to still interact with their peers. This paved the way for desk space personalization and a new level of comfort for workers.

Cubicles were still the most dominant office layout, continuing the trend for employee privacy. There are more opportunities for employees to work autonomously. It was also during this time when computers began to populate offices, which were giant whirring machines that took up rooms.

The PC was introduced to the public in the 1980s, which changed the way workspaces were designed and how they operate. Since the PC was still enormous back then, workstations were quite heavy and spacious.

Open offices were reintroduced for collaboration of employees. Cellular phones rose to fame, and this became a prominent communication device for workers.

Coworking spaces became a popular type of workspace, and so were the concept of home offices. The idea that people could work remotely as long as they have reliable internet connections were entertained.

Remote work became even more popular, and people are now able to accomplish a lot of tasks with the use of laptops. Conferences and meetings were done through video calls. This trend is predicted on continuing until the 2020s.

There’s a prediction for wellness-based offices, where employee health will be prioritized by employers. This will call for ergonomics, aesthetics, flexibility, work-life balance, and prepared meals even more.

Google is one of the most coveted companies to work for in the world due to their status and importance to the internet as we know it today. Their work complex, the Googleplex, is a massive facility in Mountain View, California. Besides the tech influences of the property such as tight network security, it doesn’t fail to consider its employees’ well-being. It’s one of the more futuristic places out there with facilities such as a 24/7 gym, sports areas, massage rooms, and an on-site doctor. Employees can almost live in the space as it has dry-cleaning facilities and kitchens, too.

The Apple Park in Cupertino, California is one of the eco-friendliest tech office spaces worldwide—and it’s also one of the biggest. They are nicknamed the “spaceship,” and the property houses over 12,000 employees and spans 175 acres. The space has 9,000 drought-resistance native trees, fields, gardens, and plenty of nature spots, such as meadows and ponds. It also houses a 100,000-square-foot fitness center where employees can work out. The best part? The buildings are powered by renewable energy!

Facebook’s HQ in Menlo Park, California, is already huge at 430,000 square feet. They, too, embrace the modern outdoor architecture of their office as they have a lot of outdoor meeting rooms and open spaces integrated with nature. They also welcome hip culture as they have plenty of murals and outdoor art installations that circle their buildings. If the employees need a break, lounges and relaxation corners are available. They can also opt to ride a bike across buildings or even take a tram to get from one side to the other.

Microsoft’s 500-acre lot in Redmond, Washington will house 131 buildings built with new tech such as sensors and building automation systems. In a way, they combine elements that are present at both the Facebook and Apple HQ, such as outdoor meeting areas and the fact that some of their buildings are also powered by renewable energy. Microsoft’s strategic location makes it commuter-friendly, and the roads inside the property are made for walking or cycling to encourage employees to move around and not stay static for long periods.

The Salesforce Tower is the tallest office building in San Francisco. It’s a famous landmark in the area due to the top nine floors having LED lights installed on the exterior, giving passersby a light show every night. The design of the building can take advantage of natural light coming into the office. Salesforce notably doesn’t have a kitchen inside their HQ, because they encourage their team members to go out and buy lunch. They’re also concerned with office ergonomics, such as adjustable chairs and tables.

Amazon’s glass-dome biospheres are one of the most eye-catching and unique takes on what office buildings look like. Although this isn’t the entirety of the Amazon HQ, this new city-based building in Seattle drew the attention of the public. In fact, the company has set tours inside this building, where guests have to book in advance and explore more of the unique architecture of the place. The interior features natural lighting, a kitchen and bar, and botanical gardens and décor amidst all the meeting and working areas.

Do It by Design

Embracing technology doesn’t mean just implementing new processes for your business—it involves improving your office space for the benefits of your employees as well. Let the tech companies above be a great example that beauty and aesthetics work wonders on employees’ well-being, mood, and productivity. At the end of the day, your team will be the ones to build your business higher than where it is now, so make sure you invest in their office environment to ensure their satisfaction and happiness at work.

Jen spent eight years in real estate, with six years in commercial leasing and facility management. She is now the leasing director of Figari handling leasing and business development. Her charisma and dynamic attitude certainly make her the life of the party. In her free time, she enjoys going to the beach and getting a tan.

Check out the quality designs we have that fit any business type.